Château Mouton Rothschild has its vineyards on the slopes leading down to the Gironde Estuary, in the Bordeaux  region, mainly producing grapes of the Cabernet Sauvignon variety. Today, Château Mouton Rothschild has 222 acres (90 ha) of grape vines made up of Cabernet Sauvignon (81%), Merlot (15%), Cabernet Franc (3%) and Petit Verdot (1%). Their wine is fermented in oak vats (they are one of the last châteaux in the Médoc to use them) and then matured in new oak casks.

THE HIGH CLASS WINE WITH A HUGE FINISH 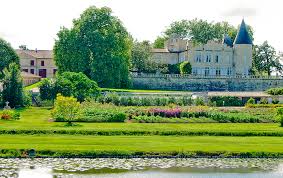 .Bordeaux Wine Official Classification of 1855 was based entirely on recent market prices for a vineyard’s wines, with one exception: Château Mouton Rothschild. Despite the market prices for their vineyard’s wines equalling that of Château Lafitte Rothschid, Château Mouton Rothschild was excluded from First Great Growth status, an act that Baron Philipe de Rothschild referred to as “the monstrous injustice”. It is widely believed that the exception was made because the vineyard had recently been purchased by an Englishman and was no longer in French ownership. The 2003 vintage marks the 150th anniversary of Mouton’s entry into the family to which it has since belonged without interruption for five generations.

Baroness Philippine de Rothschild decided to depart from tradition by devoting the entire label to Baron Nathaniel de Rothschild (1812-1870), her direct ancestor from the English branch of the family who acquired the Mouton estate on 11 May 1853.Baron Nathaniel is depicted on the label in a period photograph. The background shows part of the deed of sale.

This document, carefully preserved in the Mouton archives, marks the beginning of a long love story between the Rothschilds and the great wines of Bordeaux.Backward, powerful, and extremely tannic, the dense purple-colored 2003 Mouton-Rothschild improves dramatically with aeration. With full-bodied, meaty, powerful, dry flavors as well as a huge finish, this high class wine should be at its finest between 2012-2040+. During its sojourn in barrel, it reminded me of a hypothetical blend of the 1982 and 1986 Moutons, but since bottling, it appears different, and even more tannic than those two vintages.’ Wine Advocate 95

How to focus with the main part of a conversation
3 agosto, 2020

The origin or the legend about the Best Tapeo
24 abril, 2020

This website uses cookies to improve your experience while you navigate through the website. Out of these cookies, the cookies that are categorized as necessary are stored on your browser as they are essential for the working of basic functionalities of the website. We also use third-party cookies that help us analyze and understand how you use this website. These cookies will be stored in your browser only with your consent. You also have the option to opt-out of these cookies. But opting out of some of these cookies may have an effect on your browsing experience.
Necessary Siempre activado
Necessary cookies are absolutely essential for the website to function properly. This category only includes cookies that ensures basic functionalities and security features of the website. These cookies do not store any personal information.
Non-necessary
Any cookies that may not be particularly necessary for the website to function and is used specifically to collect user personal data via analytics, ads, other embedded contents are termed as non-necessary cookies. It is mandatory to procure user consent prior to running these cookies on your website.
GUARDAR Y ACEPTAR